From public pools to natural hot springs, Iceland has a longstanding love affair with the water. Toby Skinner jumps in for a lesson

It says something about Icelandic culture that, when a sketch comedian and actor called Jón Gnarr ran for mayor of Reykjavík in 2010, the official manifesto of his newly-formed Best Party promised “Free access to swimming pools and free towels for everyone. This is something that everyone should fall for, and it’s the election promise we’re most proud of.”

Gnarr—helped by a catchy song to the tune of Tina Turner’s ‘The Best’—won the election handsomely, serving as mayor from 2000-2014, even if he couldn’t quite push through his swimming pool pledge. “I really argued for it,” he tells me. “There was the small matter of fixing Iceland’s shattered economy, but swimming pools aren’t far behind in terms of what’s important to people here. I would get hell if one of the pools was closed for renovations.”

I’ve come to Iceland to get a sense of why swimming pools, and in particular hot baths, are such an important part of life in this land of lava, steam, elves and bleak beauty. For a population of barely 350,000, there are now more than 120 public pools, or sundlaugs, meaning just about every village or neighborhood has one, each with its own hot tub, heated by the geothermal energy that’s pumped straight from Iceland’s volcanic core. Some are rudimentary, almost backyard affairs; others are designed by modish architects—but they’re all relatively cheap to visit, and open even in the darkest depths of winter.

“The public pool is to Icelanders what the sauna is to the Finns, or the pub is to the English,” says Gnarr. “Alcohol was banned here from 1915 until 1989, so the hot tub became the center of the community: the place where people come together to talk, or just be. No topic is off-limits, whether it’s politics, personal stuff, or: does anyone know where I can get a part for my Honda Civic? Ask that at a bus stop and people will think you’re a lunatic. But in the hot tub, there will be a guy who’ll know a guy. I’ve had some very surreal, Twilight Zone conversations in the hot tub.”

No topic is off-limits, whether it’s politics, personal stuff, or: does anyone know where I can get a part for my Honda Civic?

Gnarr is a regular at the Vesturbær pool, a neighborhood pool in the capital, where the curved hot tubs have become meeting point for the the city’s movers and shakers, including Björk. “I go three times a week to clear my head and just have a nice chat in the hot tub,” says Hildur, a pop singer who won best song at the Icelandic Music Awards last year. “I see Björk there quite a bit, and I’ve seen foreigners freak out when they see her. But, for Icelanders, it’s all about treating everyone equally, especially in the tub. So if you see Björk, be cool.”

But swimming can offer more than the chance to clear one’s head, or spot a famous elfin singer. In the long rectangular hot tub, dug into the concrete just off the man-made Nauthólsvík Geothermal Beach on the edge of Reykjavík, I meet 81-year-old Haukur Bergsteinsson, relaxing with a cup of tea in hand.

Bergsteinsson enjoys swimming in the frigid sea off the white-sand beach, which was created in 2000 with imported Moroccan sand, but it’s more than that—he swears it helped him recover from cancer.

“When I started swimming here in 2008, I’d never really swum before,” he says, in halting English. “It was cold, and I didn’t go far at first. But I started getting used to it, and after a while I realised that the symptoms of the cancer I’d suffered were disappearing. It was almost like I was being reborn.”

He hasn’t stopped, swimming around 300 metres across the bay every summer day since, entering the sea over the rocks in his lime green swim cap and goggles. He’s now approaching swim number 1,600. “Whatever the doctors say, I know how it makes me feel,” he says. “It clears my head, and when I sit in the hot bath afterwards, I feel fresh, alive and happy.”

Since the first geothermally-heated public pool, Reykjavík’s Sundhöll baths, opened in 1937, Icelandic pools have become increasingly ambitious in design, with some of the newer pools looking more like five-star spas. I drive four hours north of Reykjavík to the remote, windswept Troll Peninsula, an area of bleak, Bergman-esque beauty where horses outnumber people. In the tiny village of Hofsós—population 200—I find a rectangle of bright aquamarine, built into the grassy landscape overlooking the ominously grey Skagafjörður fjord. With its elegantly curved changing rooms carved into the side of the fjord, it might just be the most beautiful public swimming pool on the planet.

The pool, which opened in 2011, was funded by local businesswomen Steinunn Jónsdóttir and Lilja Pálmadóttir, the latter the wife of Everest director Baltasar Kormákur, who wanted to give something back to the area in which they had made a life. “It was about doing something for the local community, so a pool became the obvious choice,” says Jónsdóttir, when I meet her after a blissful swim and hot bath, involving lots of floating and Wordsworthian reveries. “Hot water is part of our survival as a nation; it unites us.”

Hot water is part of our survival as a nation; it unites us.

Jónsdóttir and Pálmadóttir’s key decision, when they had the idea back in 2007, was their choice of architect. They brought in Sigríður Sigþórsdóttir, the founder of the Basalt architecture firm in Reykjavík, who has become the undisputed doyenne of modern Icelandic pool design, with a host of big projects, including Geosea, a new bath complex that opens this June near the northern town of Húsavík, known for its whale-watching tours. As Jónsdóttir puts it: “She just has a gift for blending architecture and nature. We were very opinionated clients, but she was the visionary.”

Since opening, the pool has been such a success that Jónsdóttir worries about the crowds, which increase every year. “We almost made it too nice,” she says, only half-joking. “We get so many visitors, but it’s important that the locals still see it as a place they can come and relax.”

If Hofsós is a public pool that increasingly attracts visitors (who pay a higher entrance fee), many of Iceland’s biggest pools were built primarily for tourists—including Sigþórsdóttir’s most famous project, the Blue Lagoon. The silica-rich geothermal spa, on the otherworldly Reyjkanes Peninsula in southwest Iceland, has become a ubiquitous symbol of Iceland to outsiders: so much that it was named one of National Geographic magazine’s 25 Wonders of the World in 2012, and even appeared in an episode of The Simpsons.

The lagoon appeared inauspiciously in 1976, in the form of a wastewater pool from the nearby geothermal energy plant; but, by 1981, hardy locals had started bathing in the water, boasting of its supposed healing powers. Still, when Sigþórsdóttir was hired as the lead architect in 1998, tasked with reimagining the site as a tourist attraction, scepticism was rife. “At the time, there was virtually no tourism in Iceland, and people thought it was a bit of a joke,” she tells me, when we meet in her office on Reykjavík’s main street. “I was a female lead architect, and I had all these men telling me that this project wasn’t going to work.”

Those men were fantastically wrong. Today—with visitor numbers to Iceland having boomed to more than two million a year—you have to book well in advance to join the flocks getting in-water massages and flotation treatments in the steaming aquamarine water, with their white silica face masks and Skyr smoothies.

And the already-vast Blue Lagoon keeps growing. This April saw the opening of The Retreat, a luxury hotel and day spa built into the dramatic 800-year-old lava flows, all of it surrounded by lagoon water. As with all projects designed by Sigþórsdóttir and her team, the design followed nature. “We had the lava cut by skilled craftspeople, and it informs the whole building,” she says. “We want it to feel like you’re deep in the water and the lava. Nature is always the star.”

But to bathe in hot water in Iceland, you don’t need fancy architects, and in some cases you don’t even need to build a pool, because the steaming, bubbling landscape does it all for you. In Hveragerði, a little town half an hour east of Reykjavík, I hike along a steaming geothermal rivulet, stopping only to strip off and jump in. At Hellulaug in the Westfjords, Iceland’s remote northwestern peninsula, I bathe in a naturally-heated rock pool, gazing out at the wild Atlantic Ocean, utterly and thrillingly alone.

But perhaps my most euphoric hot-water moment comes at Grettislaug, on the other side of the Skagafjörður from the slick Hofsós pool. Here, at the end of a bumpy gravel road, I find two rudimentary pools dug into the rocky land by a local farmer and tour guide, Jón Eiríksson, who has also built a small campsite around his baths, with a few little grass-covered wooden huts. With views of glacial mountains to one side, and the folkloric Drangey island to the other, it feels like the end of Middle Earth.

I quickly strip down to my swim trunks and make for the pools, my skin quickly turning to goosebumps in the chilly Icelandic air. Sliding into the warm pool is pure relief—but the bearded guy on the other side barely notices me, lost in his own Zen moment, which I feel professionally bound to interrupt.

It turns out that he’s Michel Chevalier, a 33-year-old Frenchman who has hitch-hiked here after after an epic journey cross Europe, and hasn’t left, earning his stay at the campsite by serving guests in the little reception cabin. “Arriving here somehow felt like arriving home,” he says. “You go hiking, you immerse yourself in this deep nature, and then you come back and sit in this warm water, just reflecting, being. I feel totally at peace here.”

You come back and sit in this warm water, just reflecting, being. I feel totally at peace here.

Sitting there, as we fall silent, I get what he means, and why Icelanders make this such a central part of their culture. It’s not just the chance to actually speak to people, without phones, clothes or any other distractions. It’s the pure, cleansing feeling of it all: that fresh, glorious combination of warm water and clean, cold air, often in the midst of some of the most bleakly beautiful landscapes this planet has to offer. It feels a whole lot like happiness. 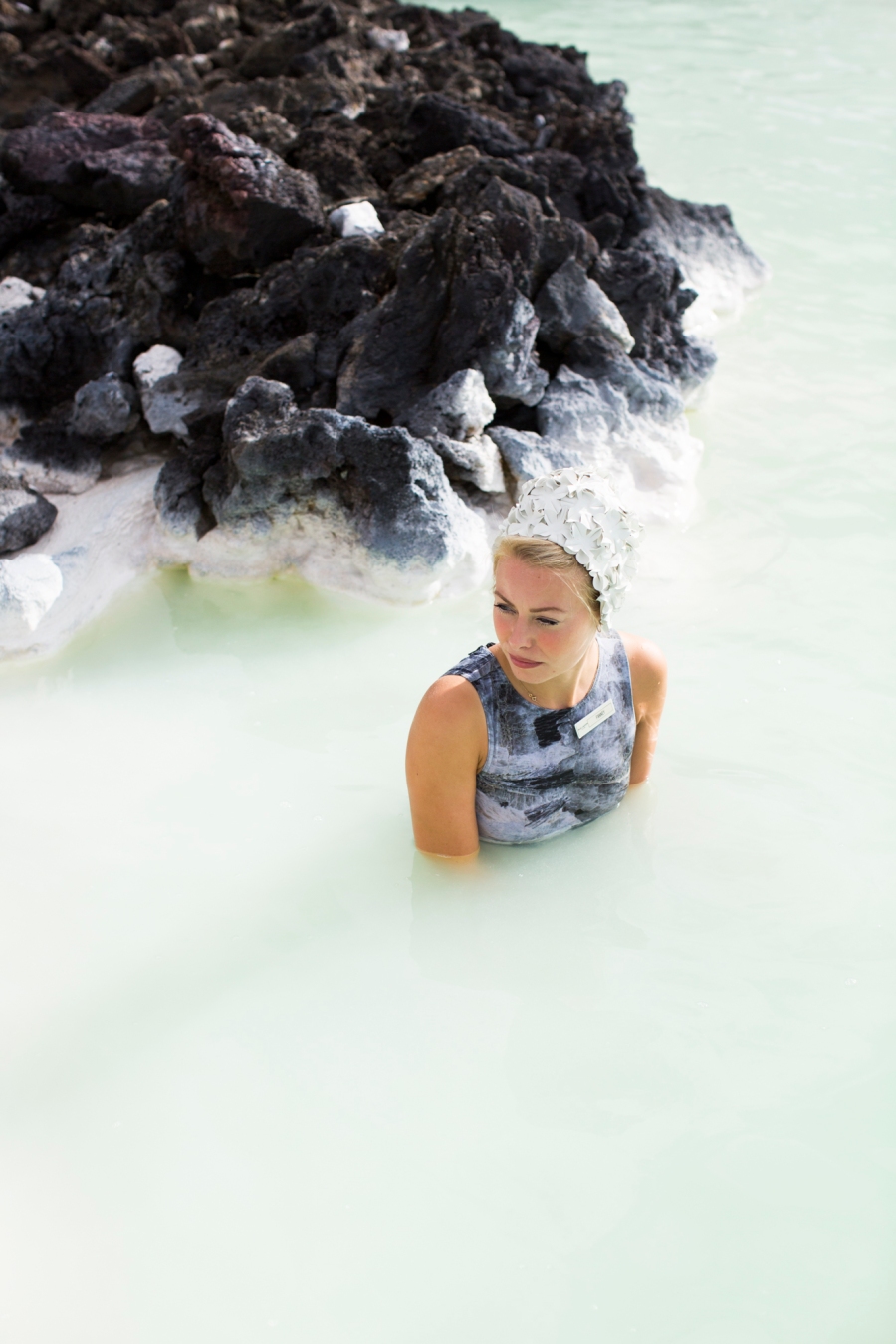 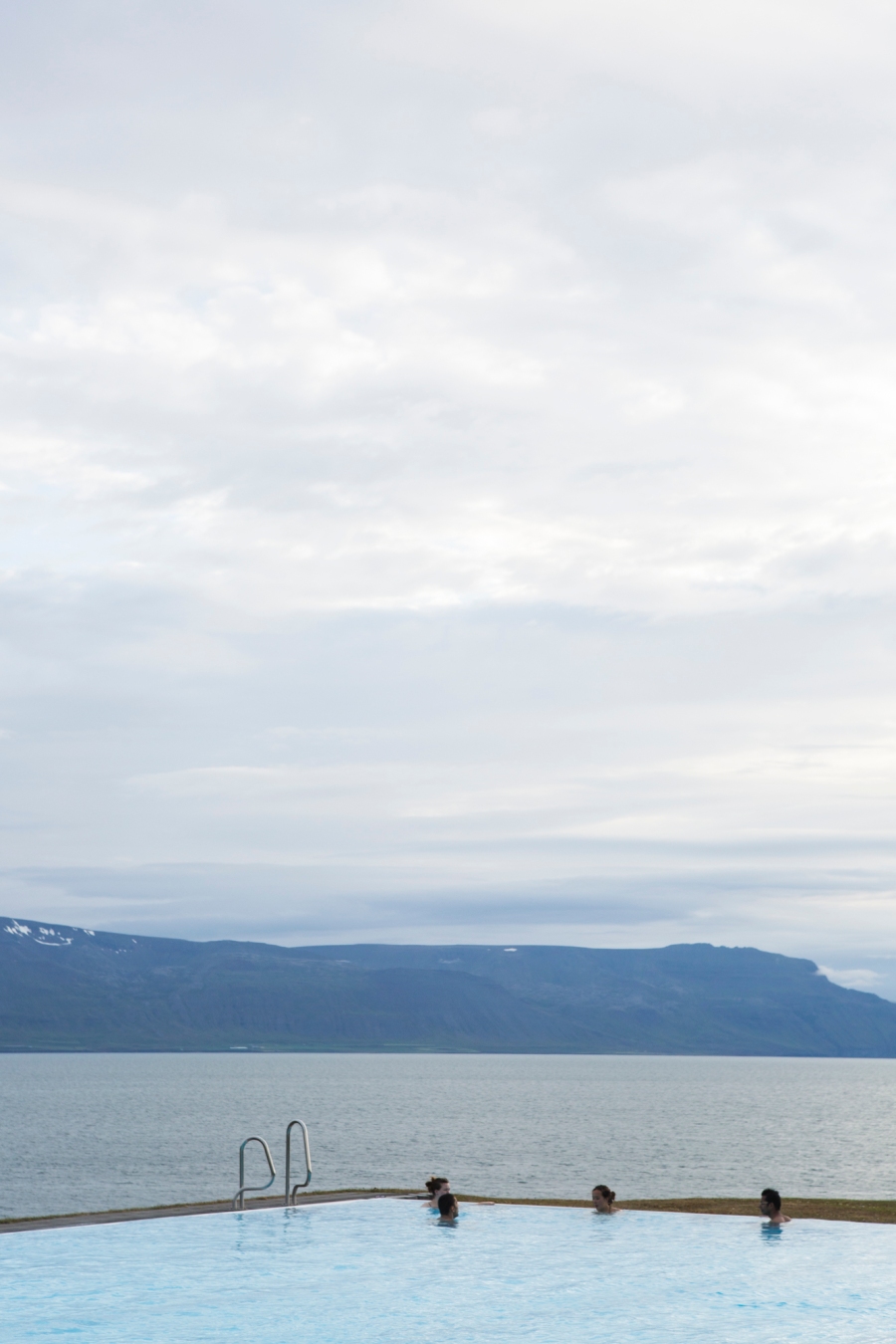