The first big decision was the cover. As a team, we liked the idea of doing the world’s smelliest fish (surströmming, or fermented Baltic herring) on the cover – and we felt like it might be time to bring a human into the concept.

Our regular cover dream team of art director Rickard and the wonderful photographer Liz Mcburney made the shoot happen, which involved a poor model putting a condom-covered herring in her mouth. We loved the shot, but there was some hesitation: it was just a tad suggestive for the very U-rated world of inflight magazines. There were a lot of discussions internally (what is she doing to that fish?!!) and externally, but we fought for it on both counts – and the airline relented. I’m still grateful, because I think it’s a really cool cover. No one complained and, to this day, it’s the most popular N by Norwegian cover on Coverjunkie.com, with 242 likes (only about ten or so of which was me liking it over and over).

More generally, I thought it was a strong issue, particularly in terms of photography. The story that I was most pleased with was the feature on the Palio horse race in Siena, when we sent Ink staffer Erin Florio and photographer Greg Funnell to document not just the race, but the pomp, ceremony and skulduggery leading up to the event. It’s by no means a new story – it’s more than 400 years old, if you’re being picky – but I think Erin really went deep into the story: she fought hard for access, and ended up learning all kinds of things about what goes on, from jockeys being drugged to horses being smeared with pheromones to distract rival horses. She also managed to capture the extreme rivalry between Siena’s contrade, or city wards.

And Greg’s photography was so stunning that we wanted to give it more and more pages (he eventually made a whole magazine about the project). There was a big debate the opening spread, when Rickard fought hard for a blurry image, despite most of the office thinking it looked like a mistake. I liked it, though, because I think the blur suggests a kind of frenzied passion at the closing stages of the race. There’s a pure emotion to that opener, and to the feature in general, that I don’t think you often get in travel magazines.

Elsewhere, it was a good solid issue. The surströmming worked, despite me being so knackered (we’d got up at 2am) that I’d had to have a little nap on the fishing boat as they hauled in tens of thousands of herring. And the photo story about how staff at the world’s top restaurants eat was really nice – based on Per-Anders Jörgensen’s book, Eating With the Chefs, and written up by deputy editor Mandi Keighran, the black-and-white images are somehow both stylised and really human. Read the full issue here. 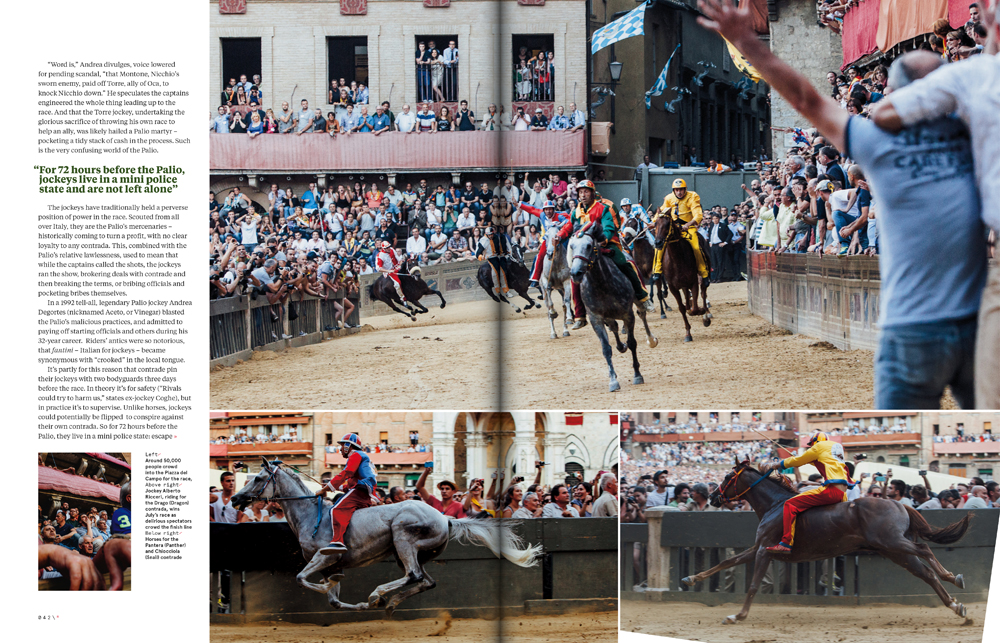 View all posts by ntskinner