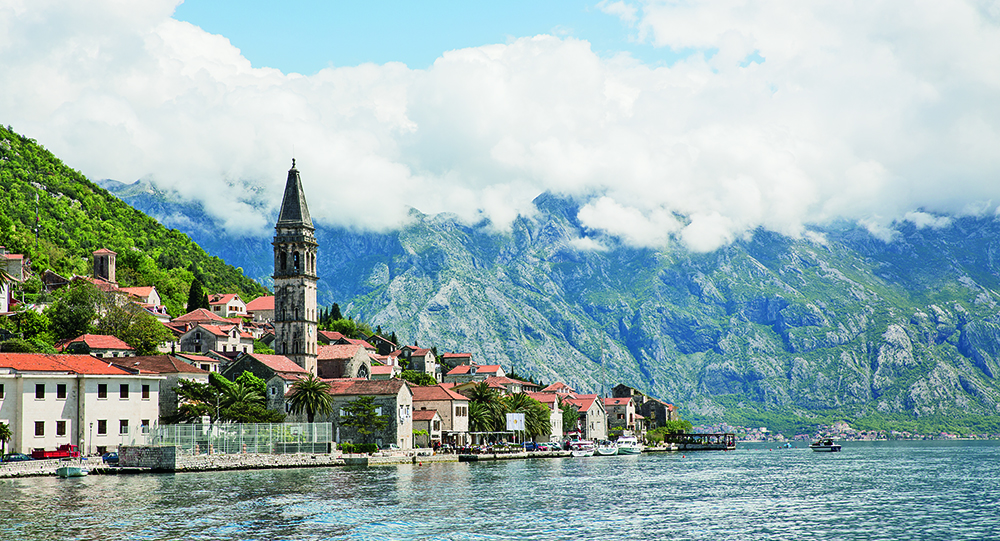 Montenegro is one of the most naturally and historically blessed countries in Europe – but it’s also one of its smallest and newest states. We head to beautiful Kotor to see how the area is adapting to life as a toursim hotspot

The Romantic poet Lord Byron famously put it thus: “At the moment of the creation of our planet, the most beautiful merging of land and sea occurred at the Montenegrin seaside… When the pearls of nature were sworn, an abundance of them were strewn all over this area.”

Fast-forward to the 21st century and blue-eyed Balkan ship captain Radomir Rajko Cavor is still saying pretty much the same thing. “We need better roads and better hotels,” he points out, “but God’s done us a hell of a favour with the rest.”

Whether or not you believe in divinity, it’s hard to disagree with either Byron or Cavor as you drive round the Bay of Kotor. It looks a bit like a mash-up of Lake Como and Norway’s Geirangerfjord, with a few mini Dubrovniks scattered around the water. Once called Europe’s southernmost fjord, the bay – all steel-blue water and steep cliffs – is actually a ria, a submerged river canyon (fjords are created by glaciers). But, whatever – all you need to know is that it’s stunning.

The Bay of Kotor, and its eponymous main town, is possibly the best place to get an idea of how tourism has developed in Montenegro. The tiny postage stamp of a state, with a population smaller than Stockholm’s, only gained independence from Serbia in 2006, and it’s been busy trying to recreate its post-war/pre-war heyday, when Sophia Loren and Marilyn Monroe would frolic along the coastline.

Tiny Kotor, which has been an important port since Roman times, revolves around a gorgeous old medieval town made up of pretty squares, churches and old limestone captain’s houses. Now a UNESCO World Heritage site, the main influence since its formation in 535 AD has been the Venetians, who ruled for the best part of 400 years, when it became a centre for shipping and Renaissance literature. But while it’s considered the best-preserved old town on the Adriatic, it’s changed hands too many times to list, and been tossed about a bit – plundered by Saracens in 840 AD, damaged under the First Bulgarian Empire, besieged by the Ottomans, attacked by the British Empire and destroyed by an earthquake in 1979. It was rebuilt completely, and you wouldn’t know half the town lay in rubble. If there’s any negative to it, it’s the same issue you’ll find in any beautiful Balkan old town: tourists, and lots of them, many dawdling around with earpieces and blank expressions.

The best man to show you round Kotor is Miro Đukanović, who was possibly the town’s first modern guide when he started tours here in 1984. He has the easy charm of a man who’s been around and lived to tell the story. He worked his way into hospitality by washing dishes in a Slovenian hotel, and spotted an opportunity in his native Montenegro in the early 1980s, a time of relative peace and prosperity as part of the former Yugoslavia. “Back then, this place was 90 per cent industrial,” he tells us over a lunch he’ll insist on paying for. “There was a rubber factory making pieces for Yugo cars and washing machines; a metal factory making bearings; a shipping company that had 17 ocean-going ships. There were cosmetics, too – the official cosmetics for the Moscow Olympics in 1980 were made here.”

Then the Yugoslav Wars started in the early 1990s and everything changed. “The factories closed, the jobs dried up, and it was a struggle,” says Đukanović. “Still, there was no actual fighting here, so we were lucky – if you’ve lost an arm or a leg, it’s a different story.” Đukanović made do with stints as a radio journalist (“You journalists are paid terribly,” he tells us, not incorrectly) and working in a student hostel.

But as soon as the troubles were over in 1999, he started guiding again, and set up his own company after independence in 2006. He now employs 12 people and says he can facilitate up to 50 guided tours a day. “It’s grown so fast,” he says. “We might get six cruises in a day, and the number of visitors is almost more than we can stand.”

It’s little wonder the tourists come, and Đukanović says Kotor has more to offer than Dubrovnik, the more famous old town an hour and a half up the coast in Croatia. “Kotor’s much older, more original and more charming,” he says. “We’ve got six 12th-century churches here; the Dubrovnik cathedral was built in the 17th century.”

Still, as you’d expect from a new country suddenly trying to make the most of its natural and historical advantages, there have been bumps in the road. Corruption here isn’t said to be as bad as in nearby Bosnia, but it exists, and Đukanović says the government was too quick to sell assets after gaining independence. Aside from ruined factories and deserted shipping headquarters, Kotor’s greatest white elephant is the Hotel Fjord, a derelict hotel which sits at the end of Kotor Bay on what must be one of the most prime pieces of real estate in the Balkans. In 2006, Montenegro sold the site to the now-disgraced Irish banker Michael Fingleton for €5.5 million, with the former CEO of the Irish Nationwide Building Society promising to turn it into a five-star resort. Since then, nothing’s happened, and Fingleton faces criminal investigation over the deal. You can still see the decaying tennis courts, infinity pool and marina, and imagine exactly how it would look with a gleaming Kempinski or Ritz-Carlton.

Still, while the hostelries in the old town are charming but basic – we stayed in the comfortable Hotel Marija – there are attempts to up the game in terms of accommodation. We head 3km round the bay to the slightly bling-y Hotel Forza Mare – 10 themed suites built into a modernist hotel with a gorgeous location right on the water – which is the closest thing in Kotor to high-end luxury, and was Montenegro’s first five-star hotel when it opened six years ago.

Perhaps dating back to the Sophia Loren days, high-end hotels in Montenegro tend to measure themselves by the celebrities who’ve stayed there – the Wikipedia page of Hotel Splendid, the five-star option in tourist-y Budva down the coast, has a whole section devoted to famous guests, from Brad and Angelina to the Rolling Stones.

At Forza Mare, hotel director Bojan Joketić, a former national youth team water polo player (water polo is the national sport here), reels off the list of celebs who’ve stayed here: Beyoncé, Jay-Z, Tom Cruise, Tina Turner, Roberto Cavalli, Pep Guardiola… and British politician Peter Mandelson. While he says Cavalli and Guardiola were the friendliest, Tina Turner didn’t like having pictures taken and hosting Cruise “was difficult. There was a boat with five or six paparazzi on it the whole time. And for Beyoncé and Jay-Z, we had to switch off the CCTV and ban all photography.”

Attracting foreign superstars seems to be a bit of a theme. The following day we head to the nearby town of Tivat and the new Porto Montenegro superyacht marina, which was converted from an old naval shipyard in 2006 by Canadian billionaire Peter Munk, and a glamorous consortium of Rothschilds and Arnaults. It’s a staggering sight – hundreds of superyachts that make Saint-Tropez look like a small-fry harbour. An official gets irate at us for taking pictures of Ulysses, a 56m monster owned by New Zealand billionaire Graeme Hart; and we’re told not to take pictures of Dijana, Novak Djokovic’s superyacht.

We’re shown around by captain Radomir Rajko Cavor, another gentleman with a near-permanent glint in his eye, who stops every 20m on the walk round the marina to say hello to friends and slap backs (“I didn’t know who that one was,” he admits after one encounter). Captain Cavor has a well-earned reputation round these parts – a Kotor native, he’s worked on ships for 24 years, 18 of them as a captain. Originally working on cargo ships, he’s diversified – not only does he bring in boats to Porto Montenegro for the likes of Roman Abramovich and Roberto Cavalli, as well as huge cruise ships, he also runs Le Coche d’Eau, a 420-seat tourist boat imported from Paris, which is the world’s only franchise of Paris’s iconic Bateaux-Mouches company, famous for its Seine river cruises. He’s a busy man but, like everyone we meet, he’s obliging and generous with both time and coffee.

As we walk past the new Regent Hotel, which is due to be opened this summer by the exclusive Aman group, he tells us the plan is for Porto Montenegro to become Europe’s biggest marina, stretching a mile from the land into the sea. It’s hard to believe it’s all happened so fast. “Well, it’s one of the most beautiful bays in the world,” says Cavor, “and, put it this way, billionaires know how to save money.” One of the measures to attract foreign investment has been cutting VAT for maritime-related services from 19 per cent to seven per cent.

Cavor makes a few calls and soon we’re stepping onto various superyachts. One of them belongs to a Bosnian minister, and before we can ask how a Bosnian politician can afford a boat like this, Cavor shushes us with a knowing smile.

On the face of it, Porto Montenegro seems like good news for the area – there’s a Knightsbridge international school at the marina, and Gary Player has designed Montenegro’s first golf course at nearby Luštica Bay – but there have also been complaints that not enough jobs at the marina have gone to Montenegrins, almost 2,000 of whom used to be employed by the old naval docks. Cavor has made the transition, but the challenge is for more local people to do the same.

Still, Montenegro’s far more than bling. Probably the most picturesque spot on the bay is tiny, perfectly preserved Perast, overlooked by the islets of St George and Our Lady of the Rocks. Strict planning laws have kept the baroque palaces and cobbled alleys almost perfectly intact, including Dublin, which is surely the world’s most beautiful Irish pub.

On Our Lady of the Rocks, the only artificially built island on the Adriatic, we meet Don Srećko Majić, the busy priest who’s been here for 44 years, overseeing 22 churches in Perast and nearby Risan, 17 of them active. He’s also helped create the local museum and runs a hostelry for pilgrims. Though he doesn’t speak any English, he manages to use sign language to indicate that more and more tourists are coming every year, and that he’s conducting more marriages for foreigners on Perast’s twin islets – 10 already this year.
Still, it feels unspoilt. In the village itself, with visitors ambling around and eating on terraces that jut into the water, the one thing that seems to be missing is a top-level boutique hotel. Like a lot around Kotor, it’s a developer’s wet dream.

And this is the thing about the Bay of Kotor in 2014. Locals say Montenegro has to develop – it needs motorways (there are currently none) and more hotels – but then you only have to see the built-up seaside resort of Budva just half an hour down the coast to see the high-rise perils of misguided development (“At least the girls there are pretty,” guide Miro Đukanović told us). Either way, it’s a fascinating time to visit – and whatever you think Montenegro should do with its natural and historical treasures, you won’t be in any doubt that God has done his bit.