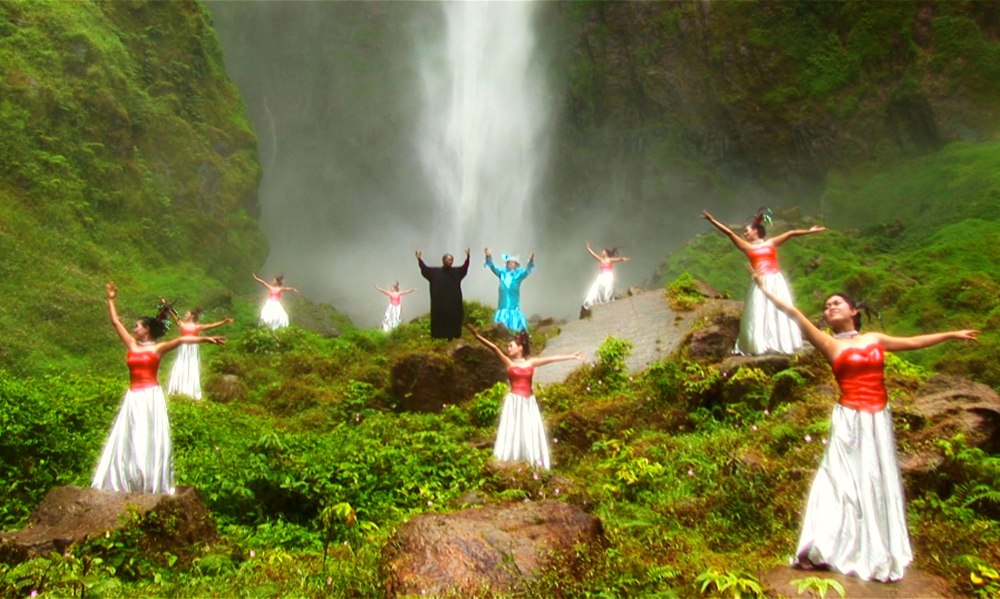 How The Act of Killing, a Danish-backed documentary about the Indonesian death squads in the 1960s, might just change Indonesia forever

Of all the reactions to The Act of Killing in the last year or so – awed, angry, dumbstruck – perhaps the most telling comes from the editor of Tempo, Indonesia’s largest news magazine, who has said there are “now two time periods. The time before The Act of Killing, and the time after it.” One Tempo critic called the arrival of the film “a historical event in itself”.

Joshua Oppenheimer’s genre- and mind-bending documentary, co-directed by Christine Cynn and an anonymous Indonesian director, has got Indonesia and the world talking about a subject that was previously staggeringly under-reported: the Indonesian killings of 1965-66, where up to a million alleged communists and communist sympathisers were butchered by local death squads. A predominantly Danish film, produced by Final Cut for Rea with Norwegian and British funding, has shone a light on Indonesia that is changing the country. The fact that it’s hotly tipped for an Oscar this month seems almost by the by.

At its core is the story of Anwar Congo, a leader of North Sumatra’s most feared death squad during the 1965-66 killings, who boasts that he killed 1,000 communists personally. He’s a grandfatherly figure who wears Hawaiian shirts and Scarface-esque white suits; and a bon vivant who likes cigars and Elvis. One of the film’s early scenes involves Anwar re-enacting his preferred method of murder: strangulation by wire, because beating people to death created too much blood.

“I’d give him [the victim] a cigarette. We’d still be laughing, dancing. It was like we were killing… happily,” says Anwar in the film, after dancing a cha-cha and recalling how he’d drown his morbid nightmares in marijuana, ecstasy and booze.

But if it seems The Act of Killing can’t go any deeper into its own strange moral vacuum, it does, and then some. Anwar and a small group of his Hollywood-obsessed cohorts agree to make a movie re-enacting their deeds, with many of the increasingly gory scenes based on Anwar’s nightmares, and often hammily performed by gangsters in drag. As they make their gory film-within-a-film, the killers joke, banter and boast like men discussing the football: one man recalls murdering his girlfriend’s father; another jokes about raping 14-year-old girls. As the vain gangsters script and act out their schlocky film, and things get more and more horrific, it’s also perversely funny in parts.

Yet slowly, the gangsters, especially Anwar, seem to find a new awareness of what their victims went through. Anwar, who has convinced himself that his victims will thank him in heaven (the subject of a horrendously kitschy song in the movie), becomes increasingly haunted as he plays the people he murdered, obsessing at one point over the open eyes of one dead victim. After desperately convincing himself that “it’s only a movie”, he finally admits: “What I did was wrong… but it had to be done.” At the end, returning to the scene of his murders, Anwar begins yet another justification for what he did but starts to gag, choking on the rooftop in which he murdered so many innocent people. As Oppenheimer says, the ending is “anti-cathartic”. There’s no escape and nowhere to go, for Anwar but also for the viewer.

Anwar’s stare into his own dark past is now being echoed by Indonesian society at large, where Oppenheimer estimates that at least 200,000 people have seen The Act of Killing, online and in secret screenings, even if it is officially banned (the entire Indonesian crew behind the film remain anonymous) and the gangsters still control many local areas.

Unlike in countries such as Cambodia, Bosnia or Rwanda, there has been no official recognition of the genocide. The Pancasila Youth paramilitary group that ran the death squads still boasts three million members, and current president Susilo Bambang Yudhoyono’s late father-in-law was one of the key generals behind the killings. In the film, one of the gangsters sums it up: “War crimes are defined by the winners. I’m a winner, so I can make my own definition.”

Tempo magazine had only written sporadically about the killings before The Act of Killing, silenced in part by long-running propaganda that insists the communists started the violence. After the film, though, the magazine sent journalists around the country to interview some of the many perpetrators – like Anwar, a large number boasted about their exploits. The result was a special edition, “Confessions of the 1965 Executioners”, which sold out in record time and has been made into a book.

According to Iwan Kurniawan, who edited the special edition: “The media had written about the victims before, but until The Act of Killing no one had ever thought to publish the confessions of the executioners before. We were amazed that they were open and seemed to feel little or no guilt about what happened. It’s made people reconsider the killings, which many Indonesians didn’t know about because it’s not in the school text books. The calls for the government to apologise to the victims have grown louder – we’re not sure if one film and one report can change Indonesian society, but it has certainly triggered a discussion.”

According to Andreas Harsono, a Jakarta-based journalist and researcher for Human Rights Watch, the film has helped but there’s a long way to go. “You have to remember this is a country where you can be jailed for owning a book of Marxism, and where the anti-communist propaganda still runs deep,” he says. “Many of the provincial capitals are essentially ruled by the sons and nephews of the killers, and it’s important they keep up some kind of justification for what happened.” Human Rights Watch is among the organisations that have called for a government investigation into the genocide, but it’s largely fallen on unreceptive ears. It doesn’t help, says Harsono, that the evidence is almost 50 years old.

Still, he is hopeful. “In 20 years, we’ll see the real impact of this mindblowing film. At the moment, only the educated urban young who have internet connections have been able to see it – and it’s changing their perspective. People in Indonesia have reported that they watched the film and literally didn’t move a muscle – a lot of people had never even heard about this before The Act of Killing.

“Crucially, the government can’t deny any of it – those are real people talking to the camera, and you can’t argue, twist or spin that. We desperately need to understand the violence in Indonesia’s past and overturn it.”

If an official recognition of the genocide, far less an apology, still seems like a long way off, Oppenheimer says that the increased awareness makes his own Heart of Darkness-style journey worthwhile. “It was gruelling and intense, and my family were begging for me to go home [he was living in London at the time] – but there was nowhere to go, I had to tell this story,” he says.

Oppenheimer’s crew spent eight years filming in Indonesia, and had initially planned to make a film about the victims of the genocide – but many were too scared to speak and they’d often get local officials barging in and disrupting filming. “Then someone said: ‘The people who killed our family members live just down the road. You could speak to them.’

“We approached very cautiously, thinking that the perpetrators would be reluctant to talk – but to our astonishment and horror, they started boasting about the atrocities they’d committed. They were telling these grotesque, grizzly stories in front of their grandchildren. It was like wandering into Germany and finding the Nazis were still in control and boasting about the Holocaust. Suddenly, all the doors were open to us.” Oppenheimer recalls how he started asking the perpetrators to recreate their murders. “It wasn’t a trick,” he says. “It was a response to their openness.”

But it was still two years and 40 in-depth interviews until Oppenheimer met Anwar Congo. After all he’d seen, he was still “astonished” as Anwar danced the cha-cha on the spot where he’d killed so many people. What was different to some of the murderers, he says, was that “there was a real pain not very far from the surface. In a way, he was making his own desperate attempt to justify what he’d done, so that he doesn’t look in the mirror every day and see a mass murderer. He wasn’t in denial of the facts; he was in denial of their meaning.”

For all his flamboyance, Anwar is a complicated character who elicits complicated reactions, and he and Oppenheimer developed an intense and difficult relationship. “The challenge was to walk that tightrope between revulsion and sympathy for Anwar. I set myself a rule – that I’d never make the leap from ‘Anwar has done monstrous things’ to ‘Anwar is a monster’. I had to see Anwar as a human being. I’m lucky that I’ll never find out how I’d have acted in his situation.”

Oppenheimer says of the final gagging scene: “I had this desire to put my arm around him and say, ‘It’s going to be okay.’ In that moment, however, I had this sickening realisation that, no, it will not be okay – and this is what it looks like when it is absolutely not okay.”

Today, Oppenheimer says he speaks to Anwar every three or four weeks, “and perhaps I always will. I wouldn’t call Anwar a friend, but we have real love for each other.”

Oppenheimer was with Anwar when he watched the film for the first time. “At the end, he was very tearful and quite silent. He said: ‘This film shows what it means to be me.’ It was one of the most moving moments of my life.”

As for Anwar now, Oppenheimer says, “His life is much the same as it was. He has no criminal jobs now, but I still don’t think he can consciously say it was wrong. But at least he’s been encouraged to talk about it.”

Even more than a year after the film’s initial release, Oppenheimer seems overwhelmed by it. It’s won scores of awards, most recently at the European Film Awards, and at press time seemed a strong bet for the BAFTAs and Oscars.

Perhaps ironically, while he calls it “my love letter to Indonesia”, he also knows he can’t go back to a country he’s spent so much time in. “The risk of an attack or of being put in prison is too great. I had a screening for Indonesians in Berlin, and asked people to raise their hands if they thought I could go back. No one did. One said you can go back but you might never get out again.”

As Indonesia slowly starts to look back at what happened, Oppenheimer says the film can be read as an analysis of how humans continue to commit atrocities, in Indonesia and elsewhere. “In the end, I think humans are essentially moral,” he says. “So they have to maintain a moral lie that leads to further evil. Because, having killed and written a victors’ history to justify that killing, you must now blame the victims because the propaganda declares it to be their fault. You have to dehumanise them because it’s much easier to live with yourself if the people you killed are not fully human. And you have to kill again – because, if the government instructs Anwar to kill another group of people for the same reason as he killed the first, refusing the second time is tantamount to admitting it was wrong the first time.”

Slowly, perhaps, Indonesia might start looking at the lie that it has told itself for 50 years. As a response to a film, winning an Oscar seems meaningless in comparison.